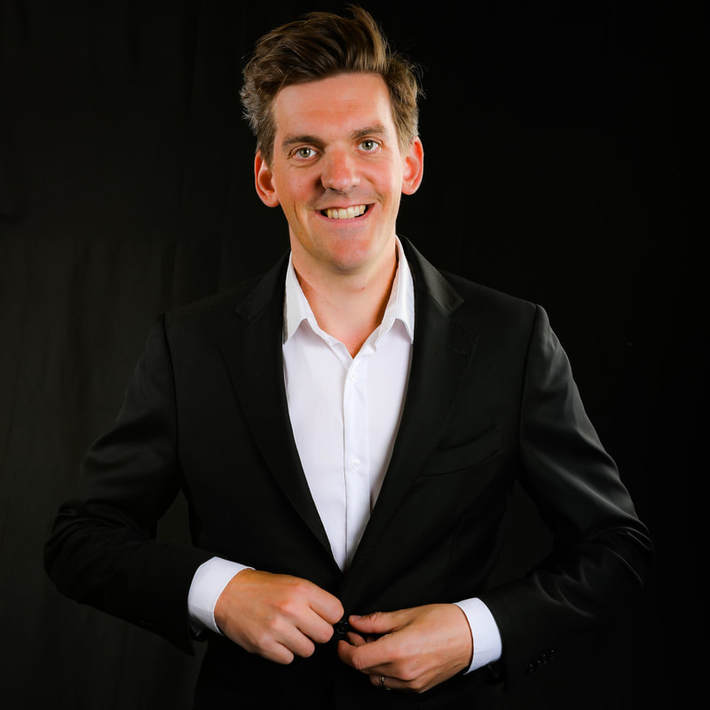 Michiel Delanghe (1987) got his masters degree at the Royal Conservatory of Antwerp (Belgium), where he studied orchestral conducting with Ivo Venkov and Koen Kessels.
In December 2013 he won third prize and Special Award in the 11th Cadaques Orchestra International Conducting Competition. It was the first time a special award was given in the history of the competition.
During his studies he conducted several concerts with the symphony orchestra from the Royal Conservatory of Antwerp and with the Ensemble XXI. Also, he served as an assistant-conductor in the Flemish Opera where he assisted conductors such as Patrick Fournillier (Turandot), Yannis Pouspourikas (Candide) and Jef Smits (Aladino e la lampado Magico). He actively participated in masterclasses with Robin Engelen and “het collectief” , with Ivo Venkov and the “Philharmonic Orchestra of Russe-Bulgaria”, with Mark Heron and the Manchester Camerata and with Peter Eötvös and the “Orchestre Philharmonique de Radio France”.
In July of 2014 Michiel made his professional debut with the Orquesta Sinfónica de Castilla y León in a program of Mozart and Beethoven. Since then, he has been invited to conduct the Barcelona Symphony Orchestra, the Youth Orchestra of Girona and the Orchestre National de Lille where he has been re-invited. He assisted amongst others the conductors Christian Arming (Schubert 9th Symphony) at the Royal Philharmonic Orchestra of Liège and Antony Hermus at Opéra de Rennes (FR) for Mozarts "La finta giardiniera".

Recent engagements (season 2016-2017) included his debut with the Royal Flemish Philharmonic Orchestra (recently renamed : Antwerp Symphony Orchestra) and a large series of performances of "Zwanemans", a successful revisited production of Richard Wagner's LOHENGRIN, made possible by a co-production between "Het PALEIS", "Opera-Ballet-Flanders" and "IOA" the International Opera Academy of Ghent.

In September 2017 Michiel was appointed guestprofessor in the conducting departement of the Royal Conservatory of Antwerp.  Aside from teaching, he will conduct several projects, including the 2017 Galaconcert with Frank Braley as a soloist.

Amongst his future engagements : his debut with Brussels Philharmonic and the Belgian National Orchestra a next cooperation with Opera-Ballet-Vlaanderen and a re-invitation with the Antwerp Symphony Orchestra.